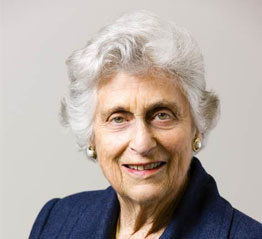 Lady Southey’s passion for better health outcomes for those living with spinal cord injury has provided the Spinal Research Institute (SRI) with inspirational leadership in her role as our Patron. Lady Southey took on this role in 2018, from her friend, Betty Amsden AO who was the SRI’s first Patron until her unexpected death in 2016. Lady Southey has expressed her desire to carry on with the important work that Betty started in seeking more support for this worthy yet neglected cause of spinal cord injury research that affects so many young people in the prime of their youth with their whole lives ahead.

“Like many families around Australia we have been touched by spinal cord injury.”

“We share the SRI’s passion to drive research in this area to improve health outcomes and the lives of those affected by spinal cord injury and their carers.”
— Lady Southey AC, SRI Patron

Marigold Merlyn Baillieu Southey is the younger daughter and fourth child of the late Sidney Myer and Dame Merlyn Myer. She was educated at St Catherine’s School and Melbourne University. Marigold married Ross Shelmerdine in 1950. They had four children, two sons and two daughters. They were restaurateurs, entrepreneurs, and built and owned the Mitchelton Winery complex at Nagambie in 1973. Ross died in 1979.

In 1982 Marigold married Sir Robert Southey, a company director and Chairman of the Australian Ballet. Sir Robert died in 1998.

Lady Southey was a director of the Myer Family Companies from the mid 1950s until she retired in December 1999. She was Vice President of the National Stroke Foundation, and was a former President of Philanthropy Australia and President of the St Catherine’s School Foundation in the 80s and 90s. She served eight years on the Board of Orchestra Victoria, and is on several committees of the Myer Foundation.

Lady Southey was made a Member of the Order of Australia in 1999 for her service to the community in the support of health care, medical research and the arts and received the Centenary Medal in 2000.

On 1st January 2001 Lady Southey was appointed as the 12th Lieutenant Governor of Victoria.

In 2006 she was made a Companion of the Order of Australia (AC). She retired as Lieutenant Governor in April 2006.