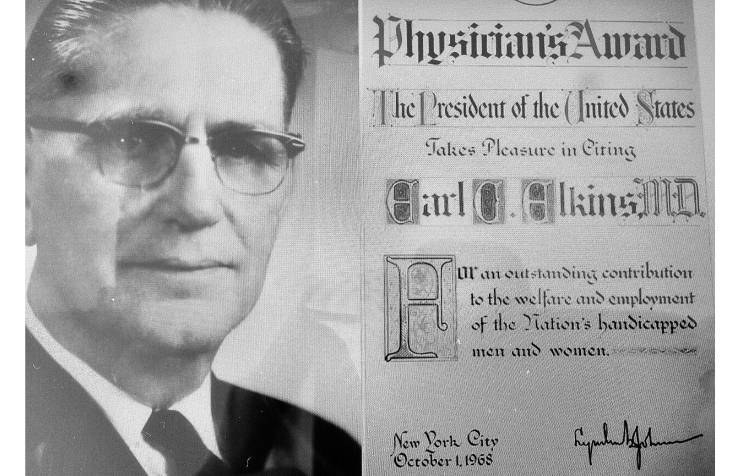 Mrs Elizabeth Rosanove recently joined the SRI’s Patron’s Program in memory of her father – Dr Earl Cook Elkins – and to support the innovative work the SRI is doing that continues the work her father started in spinal cord injury (SCI) research many years ago.

Dr Elkins was a leader in the field of physical medicine and rehabilitation, and his many achievements made him a trailblazer for his time. One of the founders of the School of Physical Therapy at the Mayo Clinic in Rochester, Minnesota, USA, he treated many people affected by polio and SCI throughout his career. However, it was the latter that was his real passion.

In 1963, during the polio epidemic in NSW, he was invited by the NSW Government to visit Sydney and consult on rehabilitation for people affected by the disease.

With Elizabeth living in Melbourne, he journeyed south to visit his daughter. A local newspaper caught wind of Dr Elkins’ visit and published an article, which led to the head of the Spinal Injuries Unit at the Austin Hospital, to reach out and invite him to visit.

Elizabeth shared some memories of her father, his impact on the physical medicine profession – including his visit to Australia – and why she’s joined the SRI Patron’s Program to support the work her father pioneered to improve health outcomes for people affected by spinal cord injury.

“My father was born in South Dakota and grew up on a ranch in very southeast Montana, in a very rugged area. His mother was a teacher, so she was very interested in education. She started his schooling at home, but he eventually went on to proper school, college, and then university to do his medical schooling in Washington DC.

“His mother was born in Rochester, Minnesota, and was a friend of the Mayo’s when they were first starting up the Clinic. Although my father wasn’t born in Rochester, his three brothers were, so he always had a connection to Rochester,” Elizabeth said.

After completing his medical schooling, Dr Elkins began working at the Mayo Clinic as a resident in general medicine, before becoming the first resident in physical medicine at Clinic. Elizabeth recalls that he was “very fascinated by physical medicine and interested in how to help the physically disadvantaged as much as possible.”

During the second world war, Dr Elkins was declared essential by the Clinic and not allowed to join the army, unlike a large contingent of doctors from the Clinic who were sent to the Pacific.

Instead, Dr Elkins remained at the Clinic where he helped train army doctors to treat the large numbers of injured WWII veterans who required physical medicine and rehabilitation.

“Apparently they learnt a great deal about how to treat spinal injuries from the experience during both the war and the severe polio epidemics,” Elizabeth said.

“He always had a real interest in paraplegia, quadriplegia and all sorts of paralysis, and the many different causes of spinal cord injury.

“He did a lot of work with tendon transplants in hands to try and get people with quadriplegia to use their fingers.”

Elizabeth remembers reading an article that he wrote back in 1946 which spoke of a lot of work still to be done to improve the lives of people with SCI. The SRI continues this legacy by supporting research that began as a seed of an idea back then. Now, like then, still more research needs to be achieved to improve quality of life outcomes.

When Dr Elkins visited Melbourne, it was early days for the Austin Spinal Injuries Unit, and Elizabeth remembers him talking about the importance of consulting with other specialities – such as urologists, orthopaedists, psychiatrists, and occupational therapists – when treating people with SCI.

“I found a letter he had written to us, and while he didn’t like to be too critical, he did make recommendations about using more allied health as the Unit was still very much in its infancy in those days and needed more support,” she said.

This was his approach to rehabilitation back home at the Mayo Clinic, where the physical therapy facility was “fitted out with a proper bedroom, living room, etc. so that patients could learn to use the normal furniture and prepare them for life back at home.”

“He was very aware of people and very much interested in the whole life of the person,” Elizabeth said.

“He was into justice for people and wanted them to have as much equal opportunity as possible, including employment.”

This led to his involvement on the President’s Committee on the Employment of the Handicapped, where he helped people affected by SCI gain employment.

“It was the early days, so it was not in general employment, but it was a special place so people could feel they were working.”

His advocacy for equal opportunity extended beyond employment. It was a time when the United States was very racially divided and “he pushed very hard to have people of colour in the same ward as white patients.”

Elizabeth said she was motivated to join the SRI Patron’s Program because of her father’s work and her own experience as a social worker in the rehabilitation setting in Melbourne.

“I know my father would be most interested in and very proud of the work the Institute is doing to continue to improve health outcomes and increase quality of life for people with spinal cord injury through good research.

“He would find the work the SRI is doing very interesting,” she said.

TO JOIN the Patron’s Program with Elizabeth please click here to learn more.

Photo caption: Dr Earl Cook Elkins was a trailblazer in the field of physical medicine and rehabilitation. As one of the founders of the School of Physical Therapy at the Mayo Clinic, he was also its Medical Director for many years. In 1968, he received the President’s Award for “outstanding contribution to the welfare and employment of the nation’s handicapped men and women”.