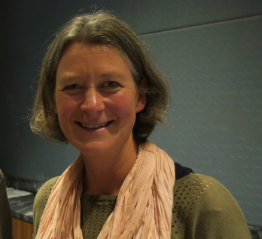 Dr Gillean Hilton, an occupational therapist at the Victorian Spinal Cord Service in Melbourne, received an SCI International Travel Grant in 2017. She attended the 56th International Spinal Cord Society (ISCoS) Annual Scientific Meeting held in Dublin, and was also able to spend a day with an organisation in London called the Back Up Trust.

“I attended ISCoS with the purpose of building my professional networks and seeking opportunities to collaborate around my research areas of interest. There are three main areas that I intend to foster in this regard: employment following SCI, peer-led interventions and ISCoS2018.

Employment following SCI was a commonly discussed topic at ISCoS, often forming part of the narrative of why research is important and how we can better support people to lead fulfilling lives. Several posters focused on various aspects of employment related research and a number of local vocational initiatives were described by different delegates from India, UK, and Mauritius.

Attendees of the SCI-OT discipline meeting were unanimous in their interest of building capacity in the area of vocational interventions. There was a general recognition of the importance of employment for people following injury.

A consistent message through the ISCoS meeting was the importance and value of connecting with the lived experience in all aspects of SCI management and research. The value of peer connections has long been recognised anecdotally, but it is only in recent years that there has been a broader interest from the scientific community to understand the peer support dynamic, and specific peer-led interventions, in a comprehensive way.

As ISCoS 2018 will take place in Sydney, there was considerable interest to harvest the energy of the lived experience and bring it to next year’s conference. A specific example of this was the suggestion to run an Active Rehabilitation course in Sydney prior to the conference.

In addition to attending the scientific meeting in Dublin, I was also able to spend the day with an organisation in London called the Back Up Trust.

Back Up Trust deliver a range of services to assist people to build confidence and independence again, and this includes offering an extensive support network. Back Up Trust respond to needs and gaps identified in the community of people that they work with, and this has seen their programs grow from running pure recreational courses to delivering a much broader array of supports and programs. It was evident from my day with Back Up Trust, and subsequent conversations with colleagues at ISCoS, that there is a need to further document the myriad of peer-led interventions that occur internationally.

Two weeks after attending ISCoS, I was also able to attend the Australia and New Zealand Spinal Cord Society annual scientific meeting in Brisbane, Australia. It was the perfect opportunity to share connections and opportunities from ISCoS with my local colleagues.