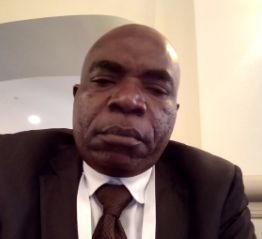 Georges Meya Kiala works at the University Clinic of Kinshasa in the Democratic Republic of Congo, and has a background in physiotherapy, physical medicine and rehabilitation.

Georges was awarded a 2019 travel grant to attend the ISCoS Meeting in Nice, France.

“The Nice congress was a great contribution to my training. Apart from the innovations on exoskeletons in motor recovery, I particularly noted two important points in the daily care of spinal cord injuries: the management of spasticity by means of trans brain stimulation, and the contribution of intermittent self urinary catheterisation in the management of neurogenic bladders.

For this second aspect, I immediately applied this strategy to a patient at the university clinics in Kinshasa. This was a 75-year-old patient, who had been operated on twice for ponytail syndrome. After operations were marked by a clinic disturbed by a motor deficit of two lower limbs, with an ASIA score evaluated at 36/50, severe lumbar pain and especially urinary retention with a bladder globe. The indwelling catheter placed from the immediate postoperative, resulted in a multi-resistant infection.

It should be noted that self intermittent indwelling catheters have never been applied in our environment, so as soon as I returned from Nice, I initiated and proposed this strategy to the team – and all in the team were unanimous.

I brought back a sample of the probe from Nice and we taught the patient how to use it. He placed an order in France and was able to obtain 100 pieces for his personal use.

Immediately after the first try he exclaimed: ‘finally I get rid of a tail that I dragged at any time’.

We have since adopted this strategy in order to reduce the incidence of urinary tract infections in our patients.”